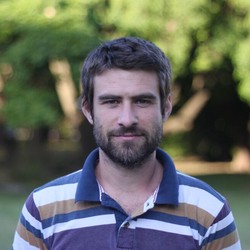 Empirical knowledge emerges as life does

I am a social anthropologist finishing a PhD in computer science working on Bayesian inference, social learning and cultural evolution. The best thing I discovered through this interdisciplinary approach was the existence of a method that guarantees intersubjective agreements in contexts of uncertainty, its isomorphism with evolutionary theory, and the real advantage that cooperation and coexistence have in both systems.

After finishing my licentiate degree (BSc + MSc) in anthropology, I decided to acquire a solid background in mathematics and computer science with the aim of using them as tools for the social sciences. In one of the top scientific institutes of Latin America, I have opened the main line of research in social sciences and Bayesian inference under the supervision of the directors of the Artificial Intelligence Lab (Diego Slezak) and High Performance Computing Lab (Esteban Mocskos). There I had the opportunity to work side by side with computer scientists, applied mathematicians, physicists, biologists, and neuroscientists, and to be evaluated under the standards of their own disciplines. I also worked as a graduate teaching assistant at the Department of Computer Sciences and supervised master’s theses in computer science, anthropology, and physics.

The PhD was originally oriented towards the study of cultural evolution in online games, but ended up acquiring a deeply Bayesian approach. To estimate the adaptability of individuals over time I found myself forced to implement the state-of-the-art skill model in the video game industry, TrueSkill Through Time (TTT), creating the first packages available until now in Julia, Python and R. Unlike the classic models (Elo, Glicko, TrueSkill, IRT), the TTT model propagates all historical information throughout a single Bayesian network, providing reliable initial skill estimates and guaranteeing historical comparability. An efficient algorithm allows millions of observations to be analyzed using few computational resources.

We focused on online games with the aim of studying the effects of social factors over individual learning. Unlike the formal sciences, which validate their propositions within closed axiomatic systems, the empirical sciences must validate them within open systems that always contain a certain degree of uncertainty. If we are always in doubt, how can we reach “empirical truths”? The strict application of probability theory (aka Bayesian inference) has proven to be not only the most successful approach in contexts of uncertainty. From an epistemological perspective, Bayesian inference also guarantees intersubjective agreements given the empirical and formal evidence (data and causal models), foundation of empirical truths.

Both evolutionary and probabilistic selection processes are multiplicative in nature. In evolutionary theory everyone is taught that lineage growth is a multiplicative and noisy process: a cumulative product of survival and reproductive rates. In probability theory hypotheses are selected through the product rule: a cumulative product of prior predictions of the observed data. Because in multiplicative processes the impacts of losses are usually stronger than those of gains (e.g. a single zero is enough to generate an extinction) there is an advantage in favor of variants that reduce fluctuations: diversification (epistemic property), cooperation (major evolutionary property), specialization (meta-epistemic property), coexistence (ecological property).

The attributes that allow humans to create complex cultures developed due to a genetic-cultural co-evolution triggered by the earlier emergence of cooperative breeding. The development of mutual understanding made knowledge a common resource that is transmitted and accumulated across generations. The reduction of fluctuations through cooperation produced an increase in their growth rate, causing a cultural transition. Before it, we were in serious danger of extinction, as evidenced by the low diversity of the human genome. After it, our species managed to occupy all the ecological niches of the earth, as no other terrestrial vertebrate had ever done before.

Coexistence with other species is the only possible strategy for a heterotrophic species like ours. The experience accumulated over the generations by people all over the world independently led to the development of reciprocity technologies, local community institutions capable of ensuring long-term social and ecological coexistence. In particular, probability theory was born in 1654 in search of the fair value of reciprocity: there is a price that guarantees coexistence in contexts of uncertainty. Despite all the advances of modernity, the concomitant colonial conquest produced a massive loss of cultural knowledge that led to the current massive loss of biodiversity, which metropolitan science seems unable to reverse.

Because cultural and scientific knowledge are common resources, we are not forced to reduce fluctuations individually so an advantage in favor of specialization emerges: it is better to bet all on the best option even though the majority may fail individually. Although the incentives of academic institutions transform the scientific activity, which is by nature cooperative, into an individual game, I will continue to bet all my resources on an empirical science based on intersubjective agreements. Ultimately, true empirical knowledge is held by plants and the worldviews of indigenous communities capable of believing at the same time in mutually contradictory ideas just as Bayesian inference does.

Gustavo Landfried (2022). Multiplicative processes as the general driver for the emergence of cooperation and specialization. Preprint Github.